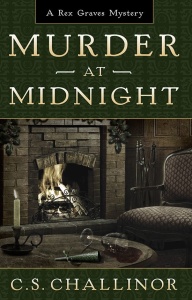 Descirption: Ringing in the New Year turns deadly at Rex's Hogmanay celebration
When barrister Rex Graves and his fiancée Helen d'Arcy host a New Year's Eve party at Gleneagle Lodge in the Scottish Highlands, an oncoming storm threatens to ruin the festivities. Despite the unlucky number of guests and an argument over the lost Jacobite gold, friends and colleagues alike are enjoying the evening with drinks flowing freely. But as the clock strikes midnight and the power goes out, Ken and Catriona Fraser -- the inheritors of Gleneagle Castle -- are found dead. Suspecting the Frasers were murdered for monetary gain or revenge, Rex investigates who and what killed the couple. He must use his skills of intellect and detection to catch the culprit in this traditional locked-room mystery.

"Seek high, seek low
For the Jacobite gold
Brought over the seas in a stout ship's hold
A princely sum raised by France and Spain
That Bonny brave Scotland might fight again.
Hidden in the glen where the eagle soars
Above the loch where the burn in spring roars
For forty-odd years buried long and deep
How many more yeas its secret to keep?"***
~ Gaelic poem containing clues to buried treasure * **

About the Author
C.S. Challinor (Florida) was educated in England and Scotland, and has traveled extensively.  Her short stories have been published in women's magazines in the United States and the United Kingdom.