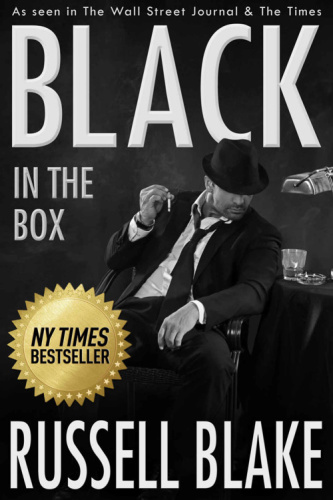 
Description: Artemis Black's world is coming apart in the days leading up to Christmas. His relationship is on the rocks, he's struggling to make ends meet, he's gone days without sleep, and when he's called in to investigate a brutal murder at a big box store in Long Beach, he's at the end of his rope. Racing the clock to clear a young woman's name before she's charged with homicide, Black gets more than he bargained for, and finds himself enmeshed in a web of deceit and betrayal that will require every ounce of his and Roxie's sleuthing prowess if they're to survive the night.
**About the Author
Featured in The Wall Street Journal, The Times, and The Chicago Tribune, Russell Blake is The NY Times and USA Today bestselling author of over forty novels, including Fatal Exchange, The Geronimo Breach, Zero Sum, King of Swords, Night of the Assassin, Revenge of the Assassin, Return of the Assassin, Blood of the Assassin, Requiem for the Assassin, Rage of the Assassin, The Delphi Chronicle trilogy, The Voynich Cypher, Silver Justice, JET, JET - Ops Files, JET - Ops Files: Terror Alert, JET II - Betrayal, JET III - Vengeance, JET IV - Reckoning, JET V - Legacy, JET VI - Justice, JET VII - Sanctuary, JET VIII - Survival, JET IX - Escape, JET X - Incarceration, Upon A Pale Horse, BLACK, BLACK Is Back, BLACK Is The New Black, BLACK To Reality, BLACK In The Box, Deadly Calm, Ramsey's Gold,and Emerald Buddha.
Non-fiction includes the international bestseller An Angel With Fur (animal biography) and How To Sell A Gazillion eBooks In No Time (even if drunk, high or incarcerated), a parody of all things writing-related.
Blake is co-author of The Eye of Heaven and The Solomon Curse, with legendary author Clive Cussler. Blake's novels have been translated into German, Spanish, Bulgarian, and Czech.
Blake writes under the moniker R.E. Blake in the NA/YA/Contemporary Romance genres. Novels include Less Than Nothing, More Than Anything, and Best Of Everything.
Having resided in Mexico for a dozen years, Blake enjoys his dogs, fishing, boating, tequila and writing, while battling world domination by clowns. His thoughts, such as they are, can be found at his blog: RussellBlake.com